Blog: Thank you, Congressman McCaul, for standing up to Communist China

As a Taiwanese American, I would like to deeply thank Congressman McCaul for his strong support of Taiwan and for standing up to Communist China’s bullying. The CCP attempts to dominate its neighbors and spread its communist vision, including by conquering the free and democratic Taiwan. Taiwan is one of the richest places in the world and a major global trading hub. Its success comes down to freedom and the rule of law, which are values America shares.

In July 2019, Congressman McCaul stated on Fox News that the U.S. $2.2 billion arms sale to Taiwan sends a very strong message to China. Congressman McCaul affirmed that the U.S. is “going to arm Taiwan so she can defend herself from what’s become a very aggressive Chinese Communist Party right on the doorstep.” He said: “‘don’t mess with Texas,’ don’t mess with Taiwan.”

During the COVID-19 pandemic, despite its proximity to China, Taiwan has seen only 467 cases and seven deaths (as of July 31st). Yet China opposes Taiwan’s participation in the World Health Organization (WHO), the WHO has taken China’s side. I am grateful that in May, Congressman McCaul and 204 Congressmen sent a letter to the Director-General of the WHO calling for Taiwan’s inclusion in the WHO. The letter states that by all accounts Taiwan has mounted one of the best responses of any country to the pandemic.

In recent months, the Chinese navy has held major military drills near the island. Chinese air force jets have flown into Taiwan’s airspace. In an interview with Voice of America (VOA) in July, Congressman McCaul pointed out that the U.S. has no desire to engage in a military conflict with the CCP but that it will not hesitate to condemn human rights violations and support democracy in Taiwan. McCaul emphasized that Washington would not allow Beijing’s crackdown on Hong Kong to be repeated in Taiwan. As the ranking Republican on the U.S. House Foreign Affairs Committee, Congressman McCaul said he believes recognizing Taiwan as a sovereign, independent country would be the harshest punishment that the U.S. could impose on Beijing.

I know Congressman McCaul will continue to do everything he can to support freedom in Taiwan while protecting our economic prosperity and ideals here in Austin from the tentacles of the Chinese Communist Party.

As a proud Taiwanese American, I wholeheartedly appreciate and am grateful for Congressman McCaul’s leadership and his strong support of Taiwan.

Team McCaul will be publishing blog posts highlighting some of the many reasons so many voters in Texas 10 support Congressman McCaul. If you’d like to submit a post, please contact [email protected] 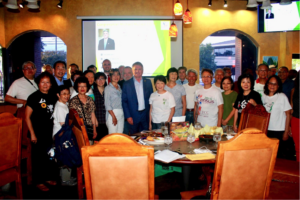